Why do armies lose wars?

Each army is the mirror image of their leader. A successful leader will motivate and lead the army to victory, and a good army will bring victory to their leader. The successful leader will claim the victory, but will be aware that without his officers and army he will never succeed. He will share his glory and plunder with them and tomorrow he will have the soldiers ready for a new battle, motivated for new victories. If he considers his army only as an executor of his personal ambitions, without sense about what happens with them, the army will fail. They will not try and contribute to their mutual success. They will lose battles, and in the end the war. 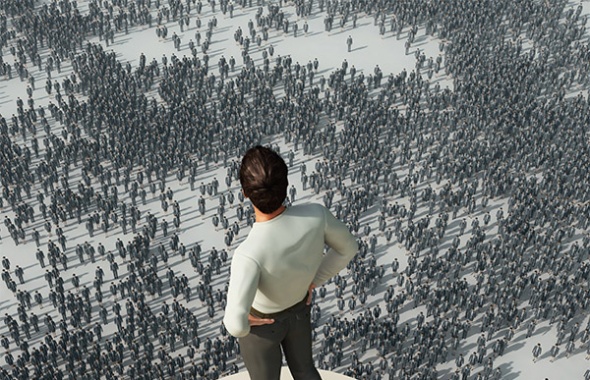 If we accept the fact that the market is only one of the battlefields, then the companies are the mirror images of their managers' capabilities. The authors of business literature usually place managers on the top of the pyramid, which is built on good employees' basis. Let us change the viewpoint for a moment. If we really want to know what happens in the company, we should try to place the manager in its base, and then build the organization's accountability towards the top. What does it look like now? 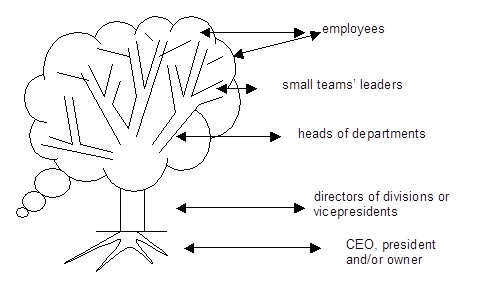 Now, this is not a pyramid any more, it is a tree, whose roots are the CEO, president and/or an owner(s). The trunk of the tree are the directors of divisions, because they are the connection between the owner and/or CEO with the rest of the company. The branches are heads of departments and smaller teams’ leaders (the thickness of the branch depends on their position), and the employees are the top branches who give leaves and fruits (products of the company).

If we know that the tree grows from its roots towards the sky, than we know that the responsibility for the success is built from the roots towards the top of the crown. The first class leader chooses his first class associates, and expects from them to choose people who are like them. Therefore, the good roots will support a healthy tree. Good foundations will support a good quality house. A good manager can create a good quality company.

So, what happens when the director fails to choose quality associates he knows and can lead well, and learns from them at the same time? What happens when he does not know an old saying that says the persons he chooses state who he really is? What happens when a person becomes the director based on knowledge and skills irrelevant to the job, but are handy in the group of equally incompetent, but politically and socially important people? These managers create only constant shortage of vaseline in pharmacies and the consequences of their incompetence could be seen in the behavior of their employees, as well as in company performance.

There are many managers who perceive their employees as bodies without brains, expecting them just to follow orders. While the business functions and is stabile, these groups of zombies have some role. But in situations when the events start developing in a wrong direction, such managers often do not have any ideas how to solve the problems, and ask their employees to come up with something – anything. They demand solution(s) from the same people they ask to leave their brains at the reception when they enter the building and pick it up when they go home from work.

The coaches are very similar to them. When they fail to teach their players how to play during training sessions during the matches they can only spread their arms and shout, "Come on, play something, will you?" I was playing handball and was a handball referee for a long time, so I am trying to picture Croatian handball team1 coach not knowing what to do, and asking the key players to "create the strategy". I can not think of a situation like this, because he did his job during practice. He chose the best players, explained goals and taught them how to reach them. Then, during the match he does not have to ask God for help, but can call one of the players and tell them, "Let's play strategy XYZ, like we practiced." The rest will be done by the players.

The problems related to the lack of solutions can happen to any of us. We could be in a situation we do not know very well and we do not have a solution or we apply some that worked in other situations, whether they will be successful or not here. Mainly, our credibility has been built on problem solution techniques. People like someone else solving their problems, and will gladly ask him/her for help. The new problem arises when these so-called specialists want to charge for their service. Again, we have a problem people can not solve. So, they need someone else, and it goes in circles.

If you draw a circle around your house, in the family circle the damage for the society does not have to be that big. The family suffers, but others do not care, because we all have our own problems. But, when bad managers start drawing circles, then the whole company suffers (as well as, entire families of employees), and if the company is important for the region then everyone else gets dizzy (not sure this is the best word here ?).

Depending on what they do with problems, managers are divided into problem creators, problem trackers, problem avoiders and problem solvers.

Problem creators follow the old rule "We have problems for all your solutions." As they do not like changes and innovations, they choose problem creating as a reason to postpone finding solutions for earlier problems they created.
Problem trackers are people to whom indecision and risks in making decisions represent challenge, and they find pleasure in standing against uncertainty. These people are often too hyper and by tracking problems (and they throw themselves into solving them) they actually hide or suppress some other problem they can not find solution for (or the solution is unacceptable).

Problem avoiders have a low level of tolerance towards uncertainty and risks and, as they do not like to take risks, they choose the alternative to problem solving with safe and known consequences and results. They do not understand that by avoiding one problem they subconsciously become problem trackers, and thus are creating a new problem (that they would not know how to solve).

Problem solvers have the medium level of tolerance towards uncertainty and risks, and when they are faced with problems they try to solve them. And that is alright, because every new day brings bigger or smaller problems, so if you solve them successfully, some of them will never reappear, and those that reappear, regardless to prior solution, each following time they would be solved faster and in a better way.

From losing a nail to losing a war

Let us go back to the question from the beginning of the story – why do armies lose wars? The answer is very complex, but the cause is only one – they have bad leaders who do not know how to cope with problems when these occur.

What is the sequence of events? We can explain it with the example of a knight, who has a terrible opponent and even a worse master. The battle is ahead of them and he goes along with the others. Then, the problems start.
The knight's horse lost a nail from the horseshoe on their way to the battlefield. The knight does not stop and place a new nail because he is afraid of the king or any other leader, so he pretends that nothing happened. Besides, they rush into the battle, so it would be very inconvenient for him to stop and fix the nail. In any case, what is important is the form, and his uniform is of bright colors and neat, he looks handsome even to himself.

As they continue, other nails also become loose, and the horse looses its shoe. But, they are too close to the enemy, and placing a new shoe would require time (which he does not have) and a blacksmith (who is in the village they passed on their way).

They launch a storm, and the poor animal starts limping, stays behind, breaks its leg and throws the knight off the saddle. Well, we started with a nail, and we have already lost a horseshoe and a horse.

The poor knight, dressed in armor and ready for riding not walking becomes an easy target for enemy's infantry. Some are using the sword, or spear, or any other weapon and the spirit of our knight flies to Saint Peter. Ooups, we lost our knight.

The loss of one knight open a passage for the enemy to reach the second, the third and the battle will soon be lost. Another hour – or two and our knights are lying around on the battlefield, some with their heads on and some without.

After a few battles like this one, the leader who did not allow his people to solve problems as they appear, but have to wait for his approval, will most probably, with nails, shoes, horses, knights, lose battles and wars. To put it in a modern language, will lead the company to bankruptcy.

Now we have only one question. Whose capital did he spend on the market? If it was his/hers, we can say, OK, easy come easy go. But if he/she took over the company someone else had created and invested in then he/she behaved as a grandchild who drank his inheritance, and lost land, woods, houses, and alike.

Poor is his family! As poor are the employees in companies led by similar people. So if your manager gambles, the only thing left is to look for any small change left for ordinary people (after the great players collected all that is worth) and search for a manager who spends his days working for his and your benefits.